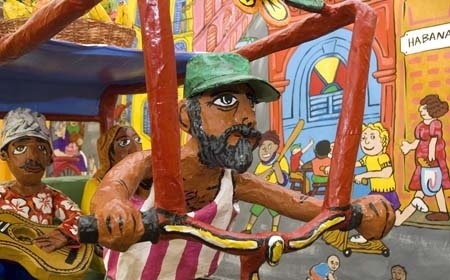 A paper-mache collaboration with artists Lyver, Yanoski and Filiberto from Cuba and Rahul and Piplu from Bangladesh.

We worked with children at Dalry Primary School in Edinburgh to make this rickshaw along with several other street characters.  These were  exhibited firstly at the Edinburgh Mela and later we used it to welcome  the public  to the “Bengali Paradise Movie Hall Experience” , when I was commissioned by film critic and producer Mark Cousins , to transform an Edinburgh Church hall into a Bangladeshi jungle, as  part of  Edinburgh Film  Festival 2009 .